Royal Caribbean vs Carnival: Which One is best?

Note: Our website is reader-supported, that means we may earn a commission on any products purchased through outside retailers (at no extra cost to you).

By far, the people of the United States love cruises more than any other form of leisure travel. Every year, millions and millions of Americans hop on to these floating hotels and set sail on adventures of a lifetime.

If you’ve ever been on a cruise ship once or twice before, then you’ve probably heard of both Royal Caribbean and Carnival. They’re probably the two most prominent names in the American cruise ship industry.

To a casual observer, you might think that both cruise companies offer the exact same thing. You know, cruises with the usual amenities like swimming pools, buffet meals, dining options, and the typical “clubhouse” fare like fitness gyms and basketball courts.

Both Royal Caribbean and Carnival are both fantastic ships to ride on. They both have a very loyal fan base, but if you’re deciding between the two, how do you pick?

There are some differences between them, and today, we’re pitting Royal Caribbean vs. Carnival to see which cruise ship comes out on top for your next dream vacation.

Generally speaking, both cruise companies offer many of the same things. So, we need to get a little nitpicky on the details that truly set them apart. We’ll look at the critical features that make the most significant difference in your trips, such as amenities, level of service, and food quality.

While the price isn’t everything, it’s still a pretty important thing. So crucial, in fact, that most people revolve their entire vacation plans on a budget.

The good news is that both Royal Caribbean and Carnival offer low-cost tier cruises that work for most budgets.

Of course, this depends on the route that you take and the time of year.

Royal Caribbean’s image is slightly higher-end than Carnival, but if you look at it, they’re really not that expensive. Sure, they have higher priced fare, but you can go as low as $600+ per person if you opt for low-end rooms and sail on shorter routes

Carnival, in contrast, is viewed as a more budget-friendly option—and the numbers show it. On average, the base fare of a Carnival cruise is around $458. That’s a full $200 cheaper than an equivalent Royal Caribbean cruise.

The clear winner here is Carnival. If you’re looking at hopping on a cruise strictly on a tight budget, choosing this cruise line might be the way to go.

Best for Onboard Entertainment and Activities

For most people, this is the most crucial consideration when choosing a cruise ship after price. After all, you’re spending most of your time aboard the cruise ship. Even when you’re docked at a port, you’re only doing so for around 8 hours.

The cruise itself is the main attraction, so you need to make sure you like the range of activities that you can do onboard. This aspect is highly subjective, of course, and it will depend on the composition of your group.

If you’re a family with smaller kids, then you need lots of activities to keep kids entertained like playgrounds and pools. If you have teen children, then maybe sports or thrill activities, and perhaps the occasional club thrown in, can keep them engaged throughout the trip

So, with that, we reviewed the entertainment options of both Royal Caribbean and Carnival based on their flexibility and range. Fortunately, both offer a strong lineup that will undoubtedly keep everyone in your family entertained.

Of the two, Royal Caribbean is definitely the more innovative in terms of activities onboard. They have included lots of great attractions like the Ripcord skydiving simulator and the Flowrider indoor surf pool in their Anthem of the Seas ship.

From bumper cars to trapeze rooms, Royal Caribbean usually has something interesting on every one of its ships. Their cruises are suitable for even the hardest-to-please kids and teens, and that’s what makes riding on their journeys really fun.

Carnival offers more on the “classic” cruise ship amenities. You have your pool, of course, which has around 2 to 3 variants, sports facilities, mini-golf, and maybe even a movie theater.

They are adding more exciting attractions in the mix, too, with plans to add in a roller coaster and IMAX theater in every one of their ships.

Next to activities and entertainment, food ranks as the next important consideration on any ship. After all, you’ll be spending a few days there. If you don’t like the food options onboard, good luck finding an alternative!

Luckily, most cruise ships nowadays offer a wide variety of restaurants, to give customers a better chance to satisfy their own food preferences. There are also lots of cuisines available to account for the increasing number of nationalities taking cruises.

In this regard, both Royal Caribbean and Carnival offer a strong portfolio of dining options that can calm down even the pickiest of eaters.

The industry standard when it comes to cruise ships is that the ticket prices include meals. That means, if you wanted to, you could eat for free. They do have specialty restaurants that charge extra if you want a unique experience.

Royal Caribbean offers a better range in terms of specialty restaurants. Their paid restaurant options are top-notch and are way above average when it comes to cruise ship fare.

However, the problem is that their free food option isn’t that up to par. Even the onboard casual burger joint Johnny Rockets isn’t free. You’re therefore semi-forced to spend more on food than you would otherwise on other ships.

While on most cruises, the free option is often reserved for the buffet restaurants, the Carnival offers much more. Their most famous burger joint on the ship is free, as well as their pizzeria and the also-popular Blue Iguana Cantina.

While Royal Caribbean offers tastier food options, Carnival gives a much better value here. In the end, value is something we, well, value. So, points to Carnival (but it was a close one) 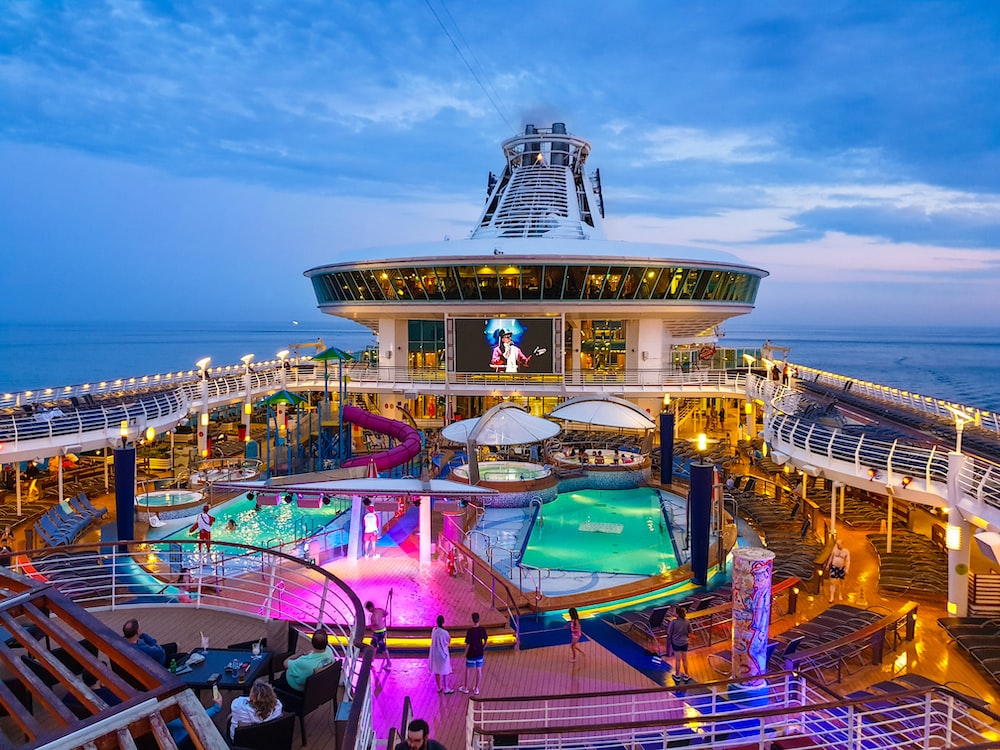 You might not know it, but how a cruise line “feels” is an important consideration when you’re hopping on one. A sophisticated and elegant feeling might be overly intimidating or “boring” to some people who prefer more fun and vibrant atmosphere.

Everything from the ship’s décor to staffing contributes to this feeling. Even how the staff talks and treats you is a reflection of this.

There’s also a whole “culture” in a ship that you will either love or hate. If it matches what you want, good for you! You’ll most likely have fun while onboard.

While Royal Caribbean and Carnival are both geared towards families, there’s a fundamental difference in what culture or vibe they project. In the end, it will depend on what you prefer.

Don’t get us wrong, though. Both cruise lines offer plenty of fun!

Royal Caribbean exudes a more luxurious and elegant feel. This is reflected in their décor, which tends to be clean and minimalistic. It’s more akin to a hotel in New York or London.

Despite this, though, Royal Caribbean isn’t dull or boring by any means. On the contrary, their many exceptional amenities more than makeup for their stuffy vibe.

True to its namesake, Carnival has a reputation among cruise-goers as the “Fun Ship.” It has a more laid back, party atmosphere, and it’s all part of the charm that keeps Carnival fans coming back. It’s like sitting back on a beach somewhere, with a summer cocktail in hand.

This vibe is also reflected in the brighter, colorful, and vibrant décor on Carnival ships, which certainly adds to the overall festive feel of the cruise experience.

It’s a tie here. What you pick ultimately comes down to personal preference, and both cruise ships deliver on their particular style and feel.

Note: Personally, I like the feel of Carnival. However, that’s just me. 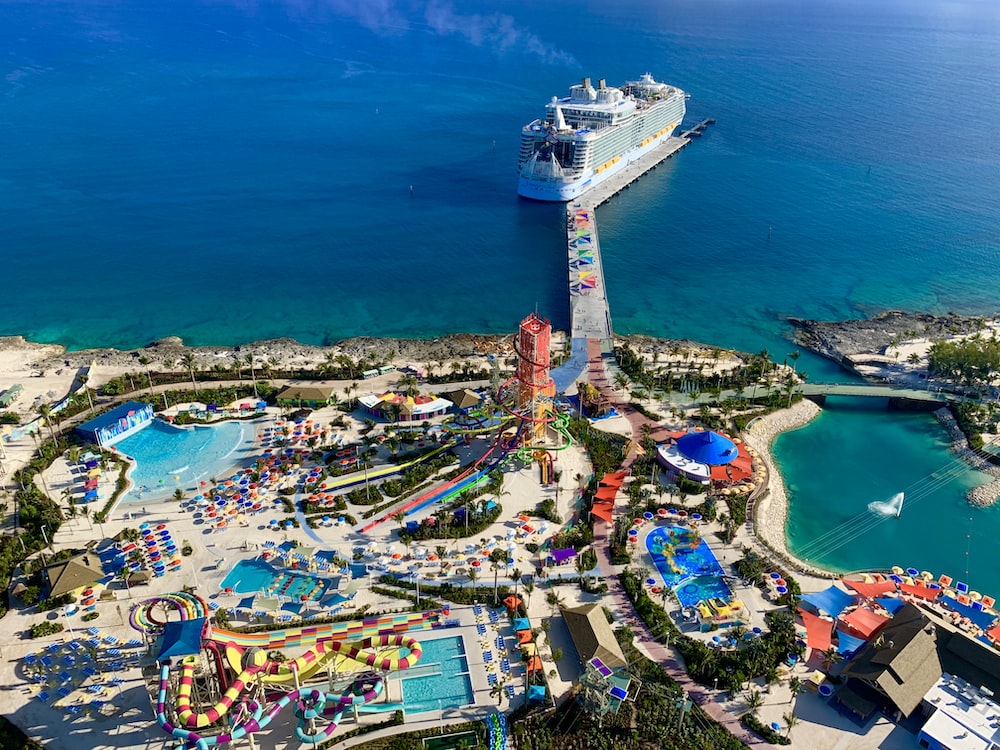 More prominent cruise companies usually invest in having their own private island. In essence, these act like another port of destination. Still, the difference is that it’s exclusive to that particular cruise company.

As you can imagine, these private islands have become selling points to attract customers to pick one cruise company over the other.

The biggest draw of these private islands is the white, sandy beaches they offer. Of course, other cruise companies can lay claim to their beach paradise. Hence, the trend now is for private islands to outdo their competitors with bigger and better amenities.

To date, these have included restaurants, shops, and even theme parks.

Royal Caribbean’s private island is called CocoCay, which out in the Bahamas. It is a full-featured, must-visit destination on its own. The highlight of the island is a world-class water park which has the tallest slide in the world.

Apart from this, it also has a lot of restaurant options, beach activities, and a freshwater pool.

Carnival’s private island in the Bahamas as well and is called Half Moon Cay. The 2,400-acre tropical island features one of the best beaches anywhere, with clear waters and white sand.

Nature and beauty are the main draws of this private island. You can also engage in water activities like scuba diving, snorkeling, or kayaking. You can hike the island’s lush forest, too.

While it also has its own aqua park, it’s pretty basic compared to what Royal Caribbean has on offer

The clear winner here is Royal Caribbean, with its revamped private island. Still, it’s a close fight since Carnival’s Half Moon Cay is a fantastic destination in its own right.

This is another point that depends on what you’re looking to get from your cruise experience.

Royal Caribbean excels in terms of onboard entertainment/activities, having a more elegant and luxurious feel, and a fully decked out private island. (3/5)

Carnival, on the other hand, has an overall more affordable price, has better food selection included in the fair, plus a more festive and colorful vibe (3/5)

Meaning so far, we have ourselves a tie! Let’s look at the pros and cons real fast.

Pros and Cons for Royal Caribbean

Pros and Cons for Carnival

I know this will seem like a bit of a cop-out… and, well, it is. In the end, it’s a hard decision to pick between Carnival vs. Royal Caribbean. If we view the recount, we can see that both have things that they are great at, and somethings that they aren’t—most points come down to your personal preference and aren’t super cut and dry as far as a winner, too.

In the end, we call this one a tie, as both have their own merits. If you’re looking for a more affordable and festive cruise line, choose Carnival. The many delicious free food options onboard and the standard cruise ship amenities are both enough to give you an enjoyable time aboard.

On the other hand, Royal Caribbean offers better quality in terms of activities and entertainment options. This point even proves true on their private island, which is worth a visit. It might be more expensive than Carnival, but everything is worth it, even the paid dining options.

We know that whether you pick Carnival cruise lines vs. Royal Caribbean, you’ll undoubtedly have fun with either!